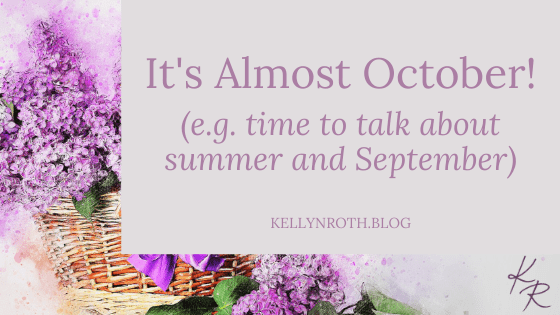 So since it’s now the 26th, meaning it’s four short days away from October, we should absolutely do a recap of the summer AND of the beginning of September (+ some goals for the next month or so).

I’m going to do my best to recap the summer AND September, but I’ll probably miss a thing or two. 😉 But that’s okay – y’all don’t need to know every detail about my life. *squints at the stalkers*

I’m also continuing to fail at living a healthy writer life and all that. But … I’ll keep at it. I keep making new schedules, and I think my work and such are starting to settle. The first couple weeks are just … hectic. Crazily hectic.

Honestly, I forgot I had any this year! But I did. Honestly, I’ve sorta already recapped them here, but … why not do it again and use it as a launch pad for further growth?

And here they are:

Actually, at the moment I’m on a hiatus from both books, focusing on an outline for a new project (well, new as in this spring, but I keep tweaking it) and also a novella that will take place between Ivy Introspective and At Her Fingertips.

However, I have outlines and about 25k of At Her Fingertips. So that’s a beginning!

I have the whole McAllen Brothers series on hold indefinitely at this point. So sadly, no.

YES! I am so excited to have begun working with my students as of this week!

Nope. I started writing them, but only got about 5 emails done on one and a bit of polishing the old sequence for the other.

Ugh, I meant to do this! But even the basic effort of writing and scheduling emails for the lists I have was enough to keep me busy.

Yes. Ish. I still need to do more work, plainly! But I’m working at it.

Neither were very big, but yes, I did!

Not yetttt … though I made a TON of progress.

I did! I’m still not back up to normal reading speeds, but I’m doing better.

Not yet. Maybe next summer. *facepalm*

I try to do this as much as possible day to day, but I fear I’m still not very quick at it.

……….. well, since I decided to shut down Reveries Co., that hasn’t been happening!

I did! And then I did it again and again … but I think right now, I need to be a bit vague. My life is up in the air.

I did! We actually did several really fun things like this.

Nah, didn’t stick with it, and now I don’t have a way to practice.

We did finally get our puppies! 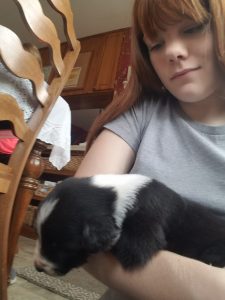 You can see more here.

Well … I’m definitely not too sane.

Well, I definitely had a … fast summer. It just flew by! And not a ton happened … but at the same time, a lot did.

I went on an awesome vacation with some of my friends. We had a couple different scavenger hunts (mine was pretty lame, but my buddies put together one for me that was epic!). We spent as much time together as we could.

One of my best friends went off to college (in some barren wasteland *tsks*). Another is about to start a very intense nursing program (GO BAILEY!).

I mostly puttered away at various projects and made a little progress on one thing and another, but I didn’t do anything big like “write an entire novel.” I actually only got about 25k (ish) for Camp NaNo in July this year!

I was also in the midst of a huge mental slump which, though I’ve tried and tried to name a specific reason for it, was more like a final act of surrender after months of various issues.

I thankfully didn’t have a breakdown, though! I felt fine. I was sad, and I felt a bit pointless, but I never got to that soul-wrenching “questioning everything I am” place. Or anything near as bad. I felt a bit numb, if anything.

However, it faded almost as suddenly as it’d come. There’s still a lot of stress in me, and I don’t feel quite as well as I did earlier this year, but I know I’m fine.

I also chose to end that relationship I’d started in December in July (my brothers have this ongoing joke of saying “you got dumped” but it was mutual) – but it wasn’t a dramatic thing. We weren’t as suited as I’d thought!

And by the time we broke up, I’d seen it coming for a while, so I wasn’t really emotional about him any more. #ISTP Problems #Which Are Also ISTP Solutions #We’re Versatile Like That

I also started more seriously engaging in Brett Harris and Kara Swanson’s YWW Author program*, and I’m so glad I did! Mostly it’s just helped me to get their professional critique and encouragement – but a lot of the trainings and such have been awesome, too!

*It’s basically a college alternative for folks who want to pursue an author career professionally. Since I’m already indie, I’m more in it for the ongoing improvements I can make AND for some training in the traditional market. I really believe in what they’re doing with the Author program. It’s groundbreaking!

Oh, and I got stickers for my laptop! And now my laptop is not working. So I might have to replace it and lose my stickers. I haven’t been so sad about something in a long time.

ALSO, I hate spending money. Unless it’s on book covers, editing, and other author-related stuff. Then I’m kinda a spendthrift. Butttttt it’s businessssss … I swearrrrr …

Anyways, we’ll see how that goes. I might just get by on this old needs-to-always-be-plugged-in laptop for a while. Ugh.

During this month, both my jobs started their new, crazy schedules, and I was about ready to pull my hair out. I miss the extra time, though I also like some of the busyness. It keeps me moving.

I also like feeling useful, which I definitely have lately at both my jobs, especially the first one.

But mostly, this month has been hectic. I haven’t accomplished a quarter of what I’d have liked to, but I’m, as always, learning to accept some losses.

I wish I could do more, but I can’t always. Sooooo gotta keep getting used to it, although I probably won’t like it.

These are, hopefully, the things I will accomplish in October. (Or not. Y’all know my track record.) I do feel pretty optimistic about them, though!

And that’s it! I’ll see you next week with (hopefully) a lot of reviews. But we’ll see if that actually happens.

How was your September, folks? And your summer? And how do you plan on your October going? Any lessons learned from hectic times in your life? 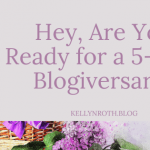 Are You Ready for a 5-Year Blogiversary? (Giveaway, Facebook Party, & More!)Kell's Blog 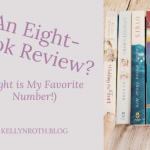